Waters of the United States

CWA programs apply to “navigable waters,” which the statute defines somewhat ambiguously as “waters of the United States, including the territorial seas.”1 Therefore, a threshold question under the CWA is: which waters are subject to CWA programs as a “water of the United States” (WOTUS)? If a water is not a WOTUS, it is not protected by the federal CWA, although states and tribes may choose to protect the water as a water of the state or tribe under their own laws.

EPA and the Army Corps Further Define WOTUS through Rulemaking.

The CWA indicates its programs address WOTUS but does not define the term “waters of the United States.”2 When a key threshold term in a statute is not clear, often the agencies tasked with implementing the statute will do rulemaking to provide additional definitional detail in regulations. The U.S. Environmental Protection Agency (EPA) and the U.S. Army Corps of Engineers (Army Corps) have further defined WOTUS several times in rulemaking beginning in the early 1970s. By 1986, the two agencies’ definition was substantially similar to the regulatory definition in place until EPA and the Army Corps promulgated a new definition in 2015.

The Courts Attempt to Clarify the Definition of WOTUS

EPA and the Army Corps have defined WOTUS in regulation since the 1970s, and courts have reviewed their regulatory definition several times. The definition of WOTUS was first reviewed by the U.S. Supreme Court in Riverside Bayview Homes. The 1985 decision in Riverside affirmed that the regulatory definition of “waters of the United States” appropriately included adjacent wetlands. The second time the Supreme Court ruled on the scope of WOTUS was in the 2001 decision Solid Waste Agency of Northern Cook County (SWANCC). In SWANCC, the Court concluded that the presence of migratory birds was not enough to consider a water to be a WOTUS, with the effect that many geographically isolated waters were no longer considered jurisdictional and therefore unprotected by the CWA. The third case before the Supreme Court was Rapanos in 2006. The Court was unable to develop a majority opinion in Rapanos, issuing multiple opinions with the effect of making the scope of WOTUS unclear. Opinions in Rapanos indicate a water is WOTUS when it has a significant nexus to a navigable water (Justice Kennedy’s standard); or when it has relatively permanent flows or, in the case of wetlands, has a continuous surface connection to a relatively permanent water (Justice Scalia’s standard); or if the water meets either the significant nexus or the relatively permanent standards (Justice Stevens opinion). Because none of the opinions had a majority of votes, the question of which standard determines a WOTUS became yet another issue to be considered by the courts. 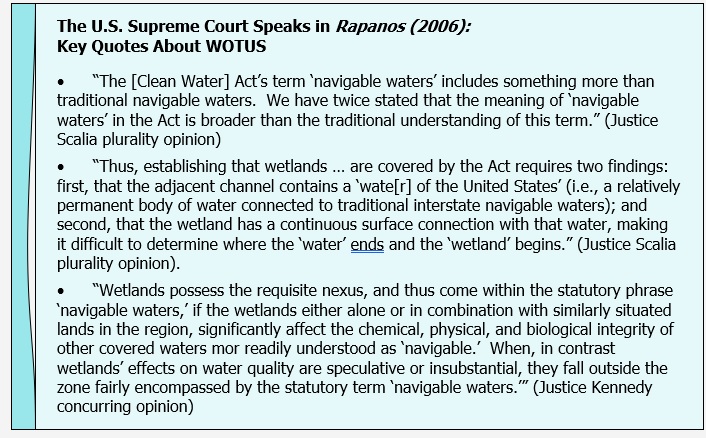 The U.S. Supreme Court has granted review for Sackett v. EPA for the 2022-23 term. Sackett raises the question of what standard should be used when determining if a water is a WOTUS, and therefore is likely to affect both timing and substance of regulatory definitions of WOTUS. Click here to review the U.S. Supreme Court docket in Sackett, including briefs and other filings: Search - Supreme Court of the United States.

In 2015, under the Obama Administration, the EPA and Army Corps finalized the Clean Water Rule which defined WOTUS by incorporating Justice Kennedy’s Rapanos opinion. The Clean Water Rule indicated jurisdiction over streams and wetlands depended in substantial part on the presence of a significant nexus to a traditional navigable water or interstate water. The Rule identified categories of waters that were WOTUS, categories that were excluded from WOTUS, and provided for a case-by-case significant nexus evaluation for waters that did not fall clearly into a category of WOTUS or non-WOTUS. The 2015 Clean Water Rule was immediately challenged in court, resulting in its being blocked from taking effect in 28 states as the courts considered whether the rule was valid.

Very early in the Trump Administration, EPA and the Army Corps decided to redefine WOTUS in two rulemaking steps. Step One, in effect on October 22, 2019, repealed the 2015 Clean Water Rule’s definition of WOTUS and recodified the regulatory definition that existed prior to the 2015 Rule. In April 2020 the agencies published the Navigable Waters Protection Rule (NWPR). The NWPR replaced the Step One rule with a new definition of WOTUS that was consistent with Justice Scalia’s “relatively permanent” standard for when a water is a WOTUS. In February 2020, EPA’s Science Advisory Board released a letter evaluating the revised definition as proposed, concluding that the NWPR “…decreases protection for our Nation’s waters and does not provide a scientific basis in support of its consistency with the objective of restoring and maintaining ‘the chemical, physical and biological integrity’ of these waters.” In comparison to the Clean Water Rule, the Board found “…[t]he proposed Rule offers no comparable body of peer reviewed evidence, and no scientific justification for disregarding the connectivity of waters accepted by current hydrological science.” The NWPR became effective on July 21, 2020. As with its predecessor, numerous lawsuits were filed challenging the NWPR. In August 2021, the U.S. District Court for Arizona vacated the NWPR nationwide in Pasqua Yaqui Tribe v. EPA, citing the environmental harms on the narrower definition of WOTUS as well as procedural errors.

Revising the definition of WOTUS has been a high priority for the Biden Administration, indicating NWPR’s definition was inconsistent with the Administration’s goals to protect and promote public health and the environment. In December 2021, EPA and the Army Corps proposed a new definition for WOTUS the agencies called “Rule 1,” announcing that Rule 1 would create a foundation for a subsequent “Rule 2.” The proposed Rule 1 keeps the structure and text of the 1986 regulatory definition of WOTUS, basically returning to the longstanding regulations that existed prior to the 2015 Clean Water Rule. The proposal would restore those regulations while incorporating elements of the “relatively permanent” and “significant nexus” standards from Rapanos, to ensure the definition of WOTUS reflects the scope of agencies’ Clean Water Act (CWA) statutory authority and relevant Supreme Court decisions. The public comment period on the proposed Rule 1 closed on February 7. NAWM provided comments on the Rule 1 proposal; click here to see NAWM comment letter.

For a table of WOTUS milestones from 1972 to present day, click here. WOTUS has had a long history with many regulatory changes and litigation challenges to how the term is defined. NAWM has worked to stay abreast of potential changes in jurisdiction and practical implications for Clean Water Act programs, to ensure state and tribal wetland program managers are prepared and equipped to navigate any regulatory changes or impacts to their programs. We will continue to update this page as developments occur.