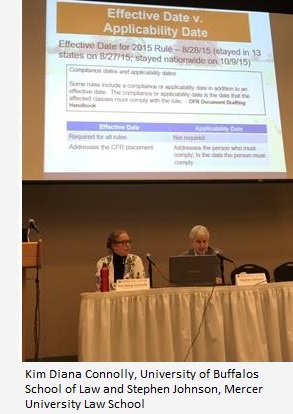 In the Courts - What's next for Waters of the United States Rule?

Kim Diana Connolly has focused a large part of her academic career on laws and policies that regulate and protect the planet and its inhabitants. She serves as a Professor of Law, and the Vice Dean for Advocacy and Experiential Learning for the University at Buffalo School of Law, where she directs both the Advocacy Institute and the Clinical Legal Education Program. She teaches environmental law courses, including the Environmental Advocacy Clinic. She also studies, writes and speaks about environmental and animal law policies, creatively examining and sharing ideas as to how to move toward a sustainable future.  Professor Connolly’s commitment to environmental justice began before she attended law school, when she ran a non-profit working to bring social justice to those facing a lack of access to clean water and sanitary wastewater removal in North Carolina. After earning her law degree, she has advocated in multiple arenas, including in judicial settings, before federal, state and local legislative bodies, with federal, international, state, and local administrative bodies, and beyond.  When she joined academia, Professor Connolly began exploring environmental and related policies. She has written both traditional and non-traditional works, and presented at numerous conferences around the world. Professor Connolly’s work has been used by policy-makers as well as cited by scholars. Prior to her teaching career, she practiced law with a number of Washington, D.C., law firms, including Beveridge and Diamond and Hunton & Williams. She received her J.D., magna cum laude, from Georgetown University Law Center and her LL.M. with highest honors from George Washington University Law School. Professor Connolly did her undergraduate work in chemistry at the University of North Carolina at Chapel Hill where she was a Morehead Scholar, and served as a VISTA volunteer between college and law school. She also received a certification in Non-Profit Management from Duke University.

Stephen M. Johnson is a Professor of Law at Mercer University Law School in Macon, Georgia. He received his J.D. from Villanova University School of Law and an LL.M. in environmental law from the George Washington University Law School. Prior to teaching, he served as an attorney for the Bureau of Regulatory Counsel in the Pennsylvania Department of Environmental Resources (now DEP) and as a trial attorney for the U.S. Department of Justice, Environment and Natural Resources Division, Environmental Defense Section, where he worked on wetlands litigation and other environmental litigation.

He joined the Mercer faculty in 1993 and served as the Associate Dean for Academic Affairs from 2002-2012. He specializes in Environmental Law, Administrative Law and Statutory Law. In addition to authoring numerous articles on environmental law and administrative law, he has written a book on Wetlands Law, published by CALI’s eLangdell Press, and co-edited an American Bar Association book on Wetlands Law.

On January 22, 2018, the Supreme Court held unanimously that challenges to EPA’s and the Corps of Engineers’ promulgation of the Clean Water Rule in 2015, which defined the term “waters of the United States” in the Clean Water Act, may be brought only in the district courts. What does this decision mean for the stay of the Clean Water Rule that was issued by the Sixth Circuit Court of Appeals shortly after the new rule took effect? And does it even matter now that the executive branch has announced its intention to rescind the Clean Water Rule and replace it with a definition of WOTUS that will narrow the reach of the Act? Two experts on WOTUS will explore these questions, and yours, in a webinar on Friday, February 9, 2018 at 10:30 AM EST.

Royal C. Gardner is Professor of Law and Director of the Institute for Biodiversity Law and Policy at Stetson University College of Law. He is an internationally recognized expert in wetland law and policy. Recent projects include advising the Government of Oman regarding wetland policy, coauthoring a U.S. Supreme Court amicus brief on behalf of environmental scientists, and creating an interdisciplinary course that facilitates discourse among experienced scientists, policymakers, and students.

His research and scholarship focus on U.S. and international wetland legal and policy issues, with an emphasis on biodiversity offsets. He has lectured in Africa, Asia, Europe, and North and South America. In 2006, he won the National Wetlands Award for Education and Outreach. In 1999–2001, Professor Gardner was appointed to the National Research Council’s Committee on Mitigating Wetland Losses.

An executive editor of the Boston College Law Review and a member of the Order of the Coif, he graduated magna cum laude from Boston College Law School. He then clerked for Chief Judge Francis J. Boyle of the United States District Court for the District of Rhode Island. From 1989 to 1993, he served in the Army General Counsel’s office as the Department of the Army’s principal wetland attorney, advising the assistant secretary of the Army (civil works) on legal and policy issues related to the Corps of Engineers’ administration of the Clean Water Act section 404 program. At Stetson, Professor Gardner has served as director of graduate and international programs, associate dean, vice dean, and interim dean.

Stephen Samuels, now retired, was previously Assistant Chief of the Environmental Defense Section of the Environment & Natural Resources Division of the U.S. Department of Justice. In that capacity, Mr. Samuels supervised a staff of 15 attorneys handling federal district court litigation involving all the major environmental pollution statutes. Mr. Samuels has 31 years of experience enforcing and defending the Clean Water Act Section 404 regulatory program. During that time, he helped lead the federal government’s litigation responses to the Supreme Court's decisions in SWANCC, Rapanos, Sackett and Hawkes. Until his retirement in January 2017, Mr. Samuels headed the DOJ litigation team that defended challenges to the Clean Water Rule. Mr. Samuels is a frequent speaker on Clean Water Act jurisdiction at conferences around the country. Mr. Samuels previously was an attorney with the U.S. Department of Energy and with the law firm of Breed, Abbott & Morgan. Mr. Samuels earned his J.D. in 1977 from Stanford Law School and his B.A. in 1974 from Tulane University.